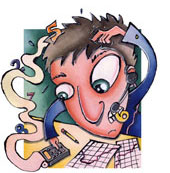 If my numbers haven’t come up yet, surely they are more likely to in future, so I should stick to playing my selected numbers, right?

If I keep changing my numbers isn’t that like two lots of numbers changing, making it even harder to win?

Sounds plausible. But sometimes we can overanalyse a problem!

The fact is, mathematically speaking past results have no bearing whatsoever on future results. Why would they? Because underneath all those lovely numbers… it’s just balls.

(Even if they seem to make those pretty patterns when you really, really look for them…)

They’re just little round balls bouncing around inside a draw machine. And those balls have no memory. They aren’t all polite and considerate, and therefore take it in turns to be drawn! They don’t know or care about things like the ‘law of averages’.

Does Playing The Same Lottery Numbers Increase Your Chances?

It feels like it should make your odds better. And a lot of people will swear to their grave that it is… but the answer is just not that simple folks. 🙂

Each draw is a unique event. Which means what happened last draw has zero effect on this draw. If ball 10 came out last time, mathematically, that doesn’t make it any more or less likely to appear next time.

So in pure maths terms if you play the same numbers all the time, or change them every week – it makes no difference at all.

Because mathematically each set of numbers always has exactly the same chance of being drawn. And each draw is a single unique event. Simple as that.

But keep reading below because this is not the whole ‘real world’ answer.

Two Things To Note However…

Firstly, creating perfect randomness is not easy (just ask a programmer). That’s why I said ‘mathematically’ about 3 times. 🙂

So if you are choosing certain numbers because you think they are a little bit more likely to appear than others – for real physical reasons – then you will probably prefer to stick with those numbers. At least for a time. (You can learn about this kind of thing and lots more in my Lottery Strategy Group).

Secondly, there are some reasons to avoid picking too many of certain types of numbers (clue: think popular!), but I’ll talk more about those reasons another time.

So Is It Better To Play The Same Lottery Numbers Every Week?

Potentially, it could be.

Depending on how you chose those numbers and why you want to continue playing them.

If you just plucked your numbers out of the air, or chose numbers from family members birthdays (as a lot of people do) – then no, it’s not better. Just continuing to play the same numbers in itself will not increase your chances at all (it won’t reduce your chances either though).

But surely my numbers have to happen eventually, and isn’t it better to hold out for that?

Even if a different combination came out every single draw and was never repeated, it would still take over 1,000 lifetimes (even for a typical 6 balls from 49 game) for all the combinations to appear.

But there’s nothing to stop combinations repeating, so they will. Which means it will take even longer for all combinations to be drawn.

And remember, just because a number was drawn does not make it more or less likely next time. The same applies to combinations of numbers – they do not get more likely just because they haven’t been drawn yet.

So if you like the numbers you have chosen, by all means keep them and play them every week.

And equally, if you like changing your numbers once in a while, or every single draw – feel free, because that isn’t going to hurt you either.

But if you are putting a bit more work in and trying to choose better numbers, then you need to be more careful and keeping the same lottery numbers (at least for a period of time) may be better.

Got a lottery question you’d like answered? Either add a comment below, or submit your question here.