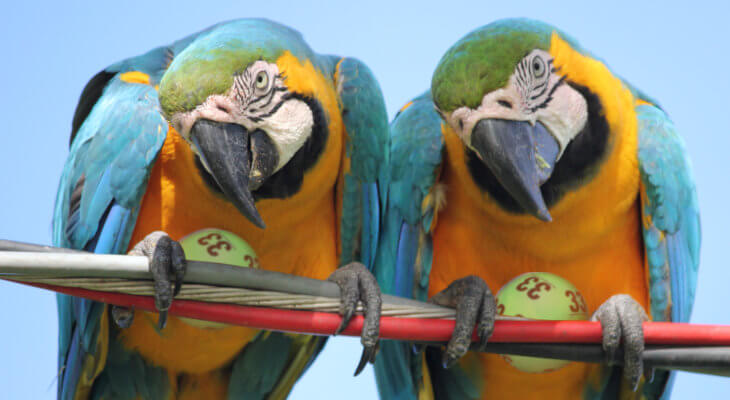 Yes, any set of numbers can be repeated. Lottery balls have no memory, they don’t remember if they got drawn last week or any other week. That means, mathematically speaking[1], they have just as much chance of being drawn again this week.

In fact, mathematically speaking[1], last weeks winning numbers have exactly the same chance of being drawn again this week.

So why does it ‘never happen’?

Think of a dice.

If you throw a 6, then roll again, are you now more or less likely to get a 6?

The 6 is still there on the dice exactly the same as it was before. So of course, it still has the same 1 in 6 chance of being rolled. There is more chance of ‘not rolling a 6’, but only because there are 5 other numbers there. Just like before you rolled the 6 in the first place.

So yes, any set of numbers can be repeated. But they are not more or less likely to be drawn again just because they have appeared before.

Have Winning Lottery Numbers Ever Been Repeated?

So has it ever happened?

Yes, the winning lottery numbers have been repeated. And more often than you might think.

Have Powerball Numbers Ever Repeated?

So yes, the Powerball numbers have repeated! Bear in mind this is for a game with extremely tough odds. So if it can happen for that game, it can (and will) happen for any game.

If you think this was crazy, there has also been a Pick 6 game where winning lottery numbers repeated the very next draw – you can read about it here.

There is some danger in this. Some people think winning numbers are more likely to be drawn again, so they teach that to other people. Problem is, these myths get around, and then lots of people end up doing the same thing.

[1] P.S. I know I keep saying ‘mathematically speaking’. The reason is too complex to get into in depth here. But we’re assuming a perfectly random draw, whereas it is theoretically possible for some bias to exist in any lottery draw. It doesn’t really change the answer in terms of repeat numbers (i.e. that combinations being drawn does not in itself make them more or less likely), but it can mean certain numbers are slightly more or less likely than others. In theory. Whew!