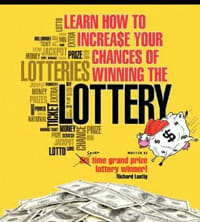 Note: I hope you love any products I do recommend as much as I do. But just so you know, this site may receive a small share of the purchase price if you do buy as a result of following a link on this page. It doesn’t affect my opinion or the price you pay.

OK, yes, Richard Lustig is a real person. But the first thing I should point out before the hype gets you, is that Richard is NOT a multi-millionaire lottery winner. He has NOT actually won 7 huge lottery jackpots either.

It’s also worth pointing out that his biggest win was back in January 2002, and his last ‘big’ win was way back in 2010.

Bear in mind that lottery winnings are also taxed in the USA. So in terms of winnings received, he’s not even a lottery millionaire (as total winnings amount to less than a million after tax!). How much is Richard worth now? Who knows – he’s probably made more from selling systems than he ever won playing the lottery or anyone else has made using Richard’s ‘lottery secrets’.

OK, but that’s still more than most lottery players have won though, right? So is it way beyond luck as he claims? And forgetting the hype, is the advice actually any good?

The Big Problem With This Book

There is some basic common sense advice in the (quite verbosely titled ‘Learn How To Increase Your Chances Of Winning The Lottery’) book – although a lot less than I give away for free in my lottery tips! Advice such as keeping tickets that lose as a tax deductible and/or for playing those second chance drawings.

Just don’t get too excited on the tax side as this doesn’t apply in most countries around the world (if they don’t tax your winnings, it’s extremely unlikely you can use your losing tickets to offset tax!).

But the big problem is that key advice he’s offering in the book is just plain wrong. On two ‘strategies’ in particular.

Richard advises always playing the same numbers every draw. He also advises buying scratch off tickets in batches of 10 of the same card rather than different cards.

Both he claims improve your chances of winning – the fact is however, neither of those things make the slightest difference to your chances (they really don’t see below…)!

This is the key piece of information he never lets on. Richard will simply not tell you how many tickets he bought to generate those 7 prizes – and therefore his real ‘profit’ (if any?). Remember, that big win (80% of his winnings) happened back in 2002.

So although he may not like to think so, buying large numbers of tickets is the real reason he has won 7 times. That, together with choosing games which are easier to win in the first place, and a bunch of luck.

There’s been a little debate in the comments below about whether playing the same numbers or changing them helps you. In pure maths terms it categorically does not make any difference. But this video should help if you’re still unsure (video no longer available)

Note that Jason Gershman, Ph.D (an Associate Professor and Coordinator of Mathematics at NSU) agrees with me on this point, and states that Richard’s advice is “nonsense” and that “you’d be wasting your time and money doing that system”.

Since the original review of this book way back in 2011, Richard has teamed up with other marketers to promote various lottery products. These include ‘Lottery Winners University’ which was a video based rehash of his book that cost $50 per month.

This also included an option to add-on or upgrade to include his software tools for a cost of $197. The ‘tools’ actually just turn out to be the nonsense previously sold as ‘Lotto Destroyer’ – but renamed as ‘Auto Lotto Processor’. Is auto lotto processor a scam? In my opinion, yes.

He has also put his name to an e-book called ‘Lotto Dominator’. This is 180 pages of filler, repetition, confusion and nonsense at an absolutely ludicrous price of $147.

And he is of course still knocking out that overpriced booklet with the very long name – but also often referred to as ‘Winning Lottery Method’.

Given Richard has still not been able to announce an 8th ‘grand prize’ win in the 7 years since 2010, I would strongly recommend avoiding all of these products too.

According to a fairly reliable source Richard died on the 22 July 2018 in Orlando, Florida. Although he had health issues (heart problems) his death has of course still come as a bit of shock to many, and our condolences go out to his family.

It looks like this will mean the end of ‘Lottery Winners University’ and ‘Lotto Dominator’ etc. Whilst not for the best reasons this is however not a bad thing as these products sadly have never offered anything worthwhile beyond minor entertainment value.

Media contact? Reporters looking for a responsive media contact can get in touch with media enquiries here.

According to statements on his old Facebook page – “his various lottery related enterprises will continue to be operated by his family”. You’d think 249 284 one-star reviews on Amazon would have been enough to bury this book, but sadly it’s still available.

Did you buy the book, join the ‘University’ or see him on TV? Let us know what you think of Richard Lustig’s lottery system book or advice by adding your comment or review below. Thanks.