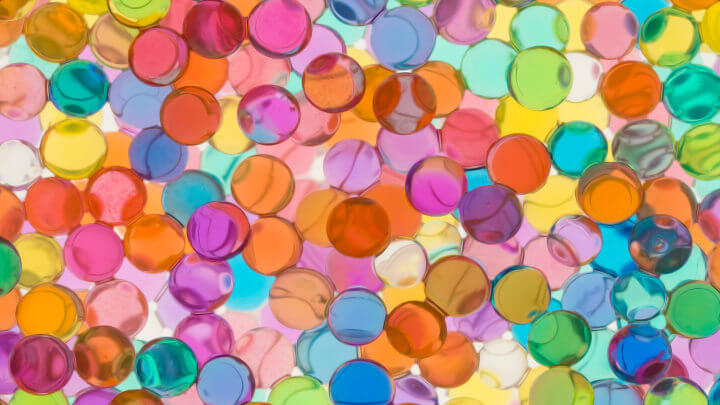 I’d like you to suspend your normal view of how a lottery works.

Imagine the lottery draw is made using a lottery machine full of lottery balls as normal. But with this draw there are no numbers on the balls. No markings at all in fact.

In this draw machine there are 49 little balls but each one is a different colour – reds, greens, yellows and blues. But no other markings. None.

So, you play this lottery by picking colours from a colour chart – a bit like choosing paint (before we had clever ‘pick anything you want’ colour matching and mixing machines!). You hit the jackpot if your six colours get drawn. Then you can start thinking numbers again, very big numbers 😉

Now would it seem sensible to you that the chances of any combination of 6 balls being drawn out of the machine is exactly the same as any other combination?

Would it make sense that the chance of Red and Yellow and Pink and Green, Orange and Purple appearing is no worse than anything else..?

You may have spotted that this combination of colours is actually a well known pattern. Most of a rainbow (can you ‘Sing A Rainbow Too’? 😉 ).

But just being that pattern doesn’t make the combination any less (or more) likely to appear, right?

So why do so many ‘lottery experts’ use patterns just like this to recommend the best lottery numbers to play?

They throw out combinations such as:-

Because these are “unlikely combinations”. After all, “they have never been drawn before…”

Myth 1: “Combinations that make a pattern are less likely”

Yes, our brain sees a pretty pattern (just like that rainbow, right?). But those balls don’t know anything about them being a pretty pattern. Neither does the draw machine.

So just because you paint a number on a ball, why on earth would that make it less (or more!) likely to jump out of the machine?

Ball number 6 does not have a quick look around to see if balls 1 to 5 have been drawn. Then only agree to pop out if they haven’t!

Myth 2: “Combinations that have not been drawn are less likely”

Picture it this way. On day 1 of a new lottery game, which combinations are less likely? Er, all of them..? 🙂

So why have certain combinations never been drawn?

Answer: simply because most combinations have never been drawn 🙂

Even the longest running games have only had a few thousand draws maximum. Ever.

And there are millions of possible combinations in most lottery games (over 13 million for a 6 balls from 49 game).

So that means quite literally that:-

99.9% of all possible lottery combinations have NEVER been drawn.
tweet this

It should not therefore be at all surprising that some of those combinations are patterns like 1,2,3,4,5,6 etc. Because the ‘not drawn’ list currently includes nearly every possible combination.

Ask me the same question in 100,000 years, and the answer will be that those ‘pattern’ combinations have been drawn! 🙂

So Where Are We At?

I should also be really clear at this stage that ‘patterns’ include all sorts of ways I see claimed of picking the best lottery numbers.

There is only one reason this can ever make sense. And it’s not for the reason anyone currently applies these methods.

But we’ll get to that shortly.

When picking lottery numbers you should NEVER pick the numbers that were drawn last week, because there is no chance they will be drawn this week…

But mathematically, last weeks numbers still have EXACTLY the same chance of being drawn as every other combination! (Crazy huh?)

I know it may sound illogical at first. Who ever heard of the same numbers being picked twice in a row..? Never happened, right?

But the reality is it could happen. After all, there is nothing to physically stop it happening.

“Yeah, OK, so it could – but it’s still far less likely than other numbers, right..?”

Mathematically it’s EXACTLY as likely as any other result.

Which is a very, very different thing.

Of course it’s vastly more likely it won’t be the same combination again. Because there are millions of combinations that are ‘not the same one’.

Or to put it another way, both are just as UNlikely as each other. Or any other possible result.

For Those Who Need To See It To Believe It…

It has now happened in the real world. Repeated lottery winning numbers have been drawn for 2 consecutive draws. And that’s live in front of an audience.

It’s also happened more than once. And will continue to happen in the future.

What this proves is that there is no ‘memory effect’ here.

Those little balls have no brains, so they don’t know what happened last week. They just bounce around and pop out again without the slightest idea of what last weeks numbers were.

This myth is exactly the sort of thing those junk lottery systems use to take your money. Let’s eliminate all those nasty unlikely combinations so you get a better chance of winning…

It’s a nice claim. But sadly it just isn’t true.

So when it comes to picking lottery numbers, just excluding past results will NOT help your chances of winning.

So What Are The Best Lottery Numbers To Play?

First up – let’s be really clear here. There is no magic ‘push button’ answer to this.

There is no ‘formula’ or ‘software’ that can (or ever will) be able to guarantee winning numbers.

If that’s what you go looking for, you are going to get conned and waste a lot of money. Because there are plenty of shady people willing to sell you that lie.

But it’s not all doom and gloom here.

Because there is one small ‘chink’ in the lottery companies armour.

Lottery draw machines are not perfect.

Of course they are well designed and well built by specialist companies. Surprise, they aren’t knocked up by the lottery CEO’s mate in his shed on a weekend 🙂

But building a ‘perfect’ random machine is effectively impossible. So these machines are built to be good enough for the job.

That means they are designed to be random enough to be unpredictable.

And this, as I mentioned above, is the only reason why it could ever make any sense to pick numbers according to patterns or past results.

But this could never apply globally. Any ‘number based rules’ about picking the best lottery numbers that claim to apply to every type of game can only ever be nonsense. How could those same rules apply to two completely different designs of lottery machine?

Maybe the way odd and even numbers are arranged in the tubes for Mega Millions could mean something. But why would that apply to the UK Lotto which is a totally different design of draw machine?

How Do You Use This Knowledge To Pick The Best Lottery Numbers?

I know this is all a big reality check for a lot of players. But what you can do is attempt to track and identify any bias that may exist in your choice of game (we get into this kind of stuff and a lot more in my Strategy Group).

Will this take a little work – yes!

Will it magically beat the lotto – no!

The best you can hope for with this approach is that you gain an edge over other lottery players. But isn’t it better to be happy applying things that have some basis in reality?