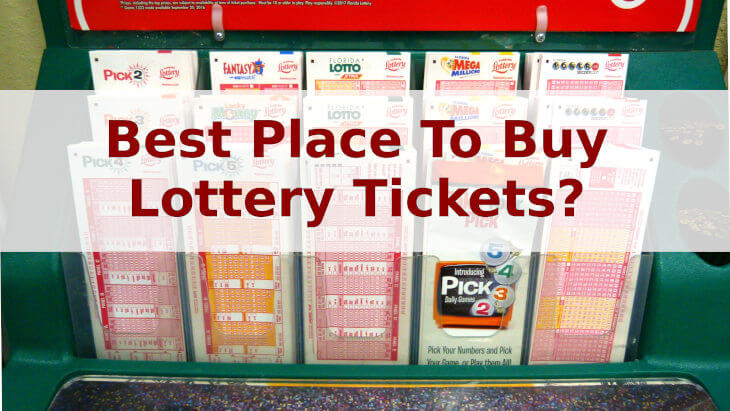 If you want to know where to buy winning lottery tickets then this is for you.

I’ve been helping people with this kind of stuff since 2003.

So What Do We Really Mean By ‘Best Place To Buy’?

Crazy question, huh? We just want to buy somewhere that gives us a better chance of winning, right? We want to know what gas station sells the most winning lottery tickets?

And here’s why (plus we’ll get to what you should be doing instead).

Because what we’re really talking about here are ‘lucky stores’ – stores that have sold the most winning tickets.

Well, let’s look more closely at what a ‘lucky lottery store’ really is.

What Is A Lucky Store?

There is no formal or legal definition of lucky places to buy lottery tickets. Because luck is not something you can really define in terms of numbers.

We just mean ‘a store that has sold some jackpot winning tickets’ – preferably the most. Because more is better, isn’t it..?

We’re not sure ‘how many’ equals lucky or ‘how big’ those prizes have to be — just that there have to be ‘some big winners’.

But How Do We Know a Place Is Lucky?

But how do we even know that a particular place is a lucky store anyhow? In other words – who told us it was?

There are two ways, we normally find this out.

Either the store itself has a great big poster in the window saying ‘big jackpot winner sold here’. Or the lottery company kindly helped us find one of these lucky places by providing details on their website.

Which isn’t the most ‘independent’ way to find this information..!

By which I mean, the people who profit directly from us buying tickets are the very ones promoting the idea of those stores being lucky in the first place.

And What Happens To Lucky Stores..?

OK, you can’t really blame the store owners themselves for putting up the posters, and promoting themselves as a lucky place to buy tickets.

After all, they sell more tickets, and their business makes more money as a result. Because players will actively seek out these stores where the most winning lottery tickets are sold. And these players are likely to spend bigger too.

Which can make a big difference to a store owners income.

[And they never actually claim that you will be luckier…]

Here’s a specific example of how important this is to retailers.

This news story mentions a couple of stores in Ohio, USA. One has sold $2.8m of prizes over 3 years. No huge winners, but their winnings are twice that of another store in the same area.

The first important thing to notice is that most of this stores business is from the sale of lottery tickets. That’s how important this is. We’re not talking about pocket change, we’re talking about the majority of these stores incomes!

And they’ve sold twice as many tickets as the other store.

So if being seen as luckier means selling twice as many tickets (and doubling your lottery retail profit), then they are going to make sure you know about those local big winners.

You can also begin to imagine how many more tickets they would sell if they had sold one of the really big winners (5 times as many, maybe 10 times?).

Hang On, They Sold Twice As Many Tickets..!

That’s the second important thing to notice. The ‘luckier’ store actually sold twice as many tickets as the other store.

Which is the real reason their winnings are twice as big!

P.S. The Newspaper Got This Fact Wrong!

I should also just point out that this newspaper article states that ‘your chances of winning increase if you buy from a store with a high amount of sales’.

What they really mean is that the chances of somebody winning at that store increases. Simply because more people are playing there and more tickets are being bought. It makes zero difference to your chances of winning.

Sure, it’s nice if someone from the same store wins – but what really matters is you winning!

It just goes to show how confusing this stuff can be, and how easy it is to get confused by misinformation.

What State/City/Town/Area Has The Most Lottery Winners?

I know why you’re asking ‘where are the most winning lottery tickets sold’. I totally get it.

But this is the wrong question to be asking 🙂

There are 3 reasons people look for the town, city or state with the most lottery winners:-

But things are not always what they seem.

Yes, it is absolutely true that some areas have more winners.

But don’t ask where have the most winning lottery tickets been sold – ask why.

Think of it this way. There are two of those ‘lucky stores’ selling tickets in the same state – Bob’s Quick Mart and Lenny’s Liquorland. Bob’s store is bang in the middle of the main commercial district of the state capital, Lenny’s place is in a sleepy rural town.

You check the winnings stats and wow, look at that, Bob has sold 25 times more winners than Lenny!

This does not mean that Bob has been blessed by the lottery gods. Nor does it mean he has some secret insider knowledge to help his customers.

What it really means is that Bob’s Quick Mart has a lot more customers.

He therefore sells 25 times more lottery tickets than Lenny does.

Because this is the real ‘secret’ of why certain towns or cities have the most winners. Those areas just have a heck of a lot more people in them, which means they collectively buy a lot more tickets.

But it does not mean that those people individually have any more chance of winning than those buying tickets at Lenny’s Liquorland.

What Gas Station Sells The Most Winning Lottery Tickets Near Me

Because the more tickets they sell, the greater the chance that they sell big winners.

But that’s just because they are selling more tickets overall. It does NOT mean that if you go there and buy a ticket that you will have a better chance of winning. It just doesn’t work like that. 🙂

So read below for what you can do that does increase your chances of buying a winning ticket.

Just don’t worry about finding a gas station that has sold a lot of winners that’s near you. Just find whatever is the closest gas station!

But Don’t The Lottery Company Tell Us This Stuff..?

Yes, they do. But they word it very carefully 🙂

They publish stories about places that sell more winners. They put out press releases that give statistics about which places or areas sell most winning tickets.

They may even say places have been lucky.

So why do lottery companies publish lists of which towns or areas have won more than others? And why do newspapers run stories that publicise this fact?

They publicise facts like this because it gives bored newspaper journalists something to write about. They never claim buying tickets in those areas improves your chances of winning.

And newspapers run these stories because they need to publish stories about something. Unfortunately they sometimes cross over the line from what the lottery company actually said, and end up suggesting you would be better off buying a ticket in a certain area. That’s not because it’s true, it’s because they didn’t really understand the facts they were given and were trying to make a story interesting!

Most journalists are not great at math and statistics – who knew 😉

And the lottery company isn’t going to correct them, as they quite like the publicity.

Still Not Sure? Ask Them

Most lottery companies will respond to your questions. And if you ask them they will be more than happy to confirm it makes no difference to your odds whatsoever where you buy a ticket!

[It makes a huge difference what ticket you buy, but that’s a different question we’ll get to in a moment]

But it certainly doesn’t hurt the lotteries ticket sales if they (let’s be kind) ‘encourage’ you to believe that certain stores are luckier than others.

After all, some lottery companies provide hot and cold numbers (or other kinds of analysis of past draws) too.

They don’t actually say it will help you to use that information. They just don’t make a point of saying it won’t help you either. Unless you directly ask them!

So What Is The Best Place To Buy A Lottery Ticket?

So where you buy makes no difference to your odds of winning. Hopefully that’s really clear now.

Which means the best place to buy is really the place that is:-

If you are one of life’s superstitious players, then by all means play at the lucky store. It certainly won’t harm your chances of winning.

But if you were simply wondering if this was something you can (or should be doing!) to maximise your chances, then worry no more. You can happily save yourself some time, and possibly some petrol/gas by simply playing wherever is the most convenient place to you.

Spending that gas/petrol money on more tickets instead would do a whole lot more to improve your chances of winning.

FINALLY: Focus On What You Buy Not Where

There is one super important thing to take away from all this.

It’s the ticket you buy that matters, not where you buy it.

Because game choice is THE most important decision you make. It affects your odds more than anything else you can do.

Best to get it right then 🙂

So if you play regular lottery games, get my playing the lottery tips.

Or if you play the scratchers, get my how to win scratch offs tips.

And if you’ve got any questions about this stuff, I’ve got your back. Just add a comment below.