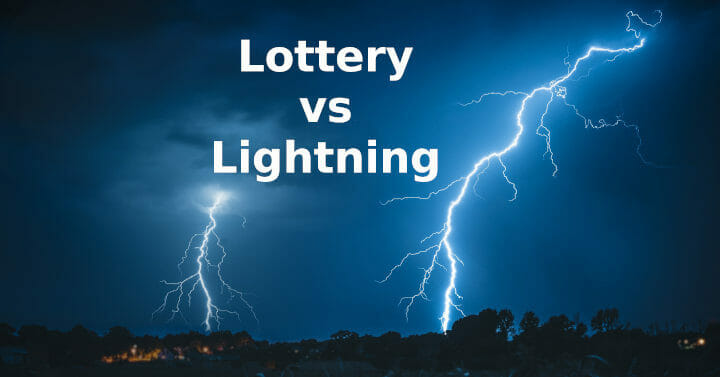 So today I wanted to talk to you about that well worn phrase, “you’re more likely to get struck by lightning, than win the lottery”.

It’s normally quoted by (somewhat smug) people who don’t play the lottery, as kind of a way to suggest you’re crazy to actually play it.

And yes, it’s a fun phrase.

But what’s the truth here – are you more likely to win the lottery or get struck by lightning?

Well, the fact is, this blanket phrase ignores a whole bunch of things:-

According to the US National Weather Service, the chances of being struck by lightning within your lifetime are about 1 in 15,300.

But this is of course an average. Across 330 million people. In a country that gets a lot of storms.

And, most importantly, some people do stupid things (yeah, I know, hard to believe isn’t it…).

Like shelter under the only tree around in a lightning storm. Or continue fishing or playing golf. They may as well be holding a lightning rod!

But if you behave sensibly in a storm, your chances of being struck effectively become zero.

Which, of course, makes your chances of winning the lottery, far better than getting hit by lightning!

But hey, the bottom line is this.