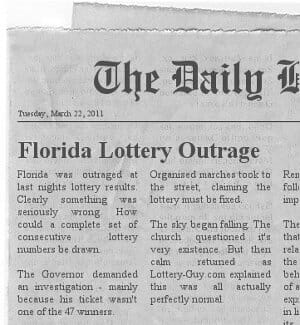 Wow, you could have heard a pin drop all over Florida on Monday.

A complete set of consecutive numbers.

That’s just totally impossible. What an incredible result. The game is clearly fixed… and other such nonsense could be heard from every direction.

The odd ‘lone voice in the room’ all across the State could be heard quietly trying to explain that this is honestly nothing significant in any way, shape or form. But nobody was listening. Because it’s more exciting to see something that isn’t really there.

Just like the same lottery numbers twice outrage back in 2009.

I know it looks like something really crazy just happened. But folks, it’s just our crazy perception (see have lottery numbers ever repeated). There are 32 sets of consecutive numbers in a 5/36 lottery game. All of which are as unlikely to come out as the non-consecutive ones.

At best there are only a few hundred combinations that look exciting.

So it’s really not surprising when the 376,000 ‘boring’ combinations appear most of the time. We don’t see a pattern, it’s not memorable, so we don’t jump up and down getting excited about it.

Look more closely at the results though, and you’ll discover that 47 people picked those consecutive numbers.

Now normally only 1 or 2 people would win the jackpot on the Fantasy 5, and win a payout of a couple of hundred thousand.

Those 47 people who all thought they were clever picking consecutive numbers all now have to share. So they each win a very disappointing $4,581.

Don’t pick numbers according to patterns like this. Because no matter how clever you think the pattern is, lots of other people do too.

And guess what just happened in yesterdays Fantasy 5 draw in Florida.

[Another totally impossible result — if you listen to many lottery ‘experts’ and publishers of misleading ‘win the lottery’ books!]

But again there’s a very good reason NOT to pick numbers like that. It’s the 98 winning tickets!

Unfortunately the owners of those tickets didn’t learn the lesson from last year, and will only be collecting $1,995.32, instead of $100,000 or so (if there were just 2 winners).

So here’s a real lottery tip: Don’t pick numbers according to patterns like this. Otherwise you are far more likely to end up sharing the jackpot – potentially with dozens or even hundreds of other winners.

Don’t let this happen to you!