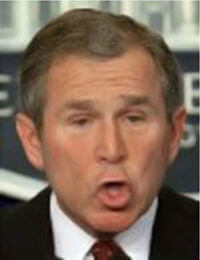 Well actually a linguist at the University of Pennsylvania, Mark Liberman, found that “like totally” is widely used by men and women of all ages. And incredibly middle-aged men use it most. So say what you like about GW, he isn’t cool, or even trying this time :-).

This belief that if something feels new to us then it must be new to everybody else too, is actually known as the infrequency illusion. We have a natural tendency to overestimate our own personal experience and not step back and look at the big picture.

This is why the less wise lottery player often convinces themself that they have discovered a significant secret to beating the lottery.

Here’s what I mean.

Take wheeling systems. And especially wheeling systems sold by people who like to use lots of testimonials to prove how effective their ‘systems’ are (whilst being careful not to make any claims they would have to legally substantiate…).

The conclusion the buyer is supposed to reach is that wheeling improves your chances of winning because look at all the people who have won using it. The reality of course should include looking at the much larger group of people who have not won whilst using the same system.

But step back and look at the bigger picture and you’ll find plenty of other combinations that have never won either. That’s because it takes a lot of draws to average out a jackpot win for each of 10’s of millions of possible results.

Even the longest running lottery in the world (yes, the Netherlands!) has had less than 15,000 draws. And most lotteries have had less than a few thousand draws!

But of course, those other results that have never won don’t get mentioned, because the numbers are not as visually pleasing to the eye.

So next time you see something that looks significant about the lottery results, step back a moment and consider if it only looks significant because you don’t have enough information. Because maybe the infrequency illusion has just paid you a visit.

No Comments so far ↓

There are no comments yet... but please do add yours below.